President Buhari has condemned the alleged execution of four aid workers by terrorists in North-eastern Nigeria. He said that the defeat of evil by good is inevitable, no matter the pyrrhic victory evildoers seem to win.

The President disclosed this in a statement by Femi Adeshina, Special Adviser on Media and Publicity to the President, in Abuja on Saturday. He expressed sadness over the development and commiserated with the family and loved ones of the aid workers.

The aid workers had been abducted near Damasak, Borno State in July and had been held by the insurgents in spite of efforts to secure their release.

“Evil will always be defeated by good at the end of the day. Whatever seeming victory evil records, eventually rebounds on the evildoer.

“We are resolved to beat evil in this land, and we remain unrelenting till we achieve it,” the President said/

He urged all insurgents to lay down their arms and rejoin decent humanity.

It is aimed at providing immediate labour intensive work opportunities for indigent unskilled youths and provide life-sustaining assistance for the aged and persons with disabilities respectively in the state.

Governor Adegboyega Oyetola at the launch in Osogbo on Friday, presented a cheque of over N2billion to 25,907 indigent and vulnerable citizens. He disclosed that the programmes are in tandem with the administration’s resolve to improve on the state’s extant social investment policy and its vision to give adequate attention to the welfare of the aged and people with disabilities across the state.

He noted that the public workfare programme will not only enhance the capacity of participating unemployed youth but also create and improve basic social and economic infrastructure in the state adding that the programme “has taken over 10,000 vulnerable youths away from roaming the streets and are participating in productive service and earning monthly stipends.”

The governor said that the public workfare will also increase the income and consumption capacities of young participants and their households, up effective demand in local markets, and increase household assets ownership, savings, and investments.

“Since inception, the Public Workfare component of YESSO has resulted in increase in the income and consumption of the young participants and their households and more importantly, active participation of these selected unskilled and unemployed youths in this programme has reduced youth restiveness and other social vices in our society,” he added.

On the Special Grant Transfer, Governor Oyetola said it was “due to our active performance in fighting the scourge of unemployment among our youths, the World Bank gave the state the opportunity to participate in Special Grant Transfer; a programme designed for persons with disabilities and the aged to avail them the opportunity for enhance consumption and improve health system.”

Leadership of the House of Representatives is set to meet with the Minister of Labour, Employment and Productivity, Chris Ngige and Minister of Power Saleh Mamman.

This is in a bid to avert the planned strike by the National Union of Electricity Employees (NUEE).

The House made the resolution on Wednesday, following a motion of urgent public importance raised by the House Deputy Minority Leader, Toby Okechukwu.

The lawmakers expressed worry that if the strike is not averted, there will be economic consequences.

Electricity union had earlier issued a 21-day ultimatum to the Minister of Power for a dialogue to resolve the lingering industrial crisis in the sector.

Some of the unresolved issues are illegal transfer of union properties to power investors and the alleged refusal by some distribution companies (discos) to remit deducted contributory pension of their members of staff to pension managers.

…says create jobs or face the wrath of the youths

Nigeria’s political elite has been urged to provide enabling environment that would allow public-private sector partnership and other corporate organisations create employment opportunities for qualified youths or continue to face their wrath.

Founder of Glory Restoration Ministry, Coker, Orile-Iganmu, Lagos, Ephraim Ifionu, who gave this charge said reports of crimes committed by youths across the country were traceable to their being idle, stating that only economic empowerment could solve the problem of youths’ indulgence in crime and criminality.

Speaking at the 20th anniversary of the church, Ifionu said with the year winding down, politicians and the government in power should take practical steps to engage the youths in productive ventures in the coming years, adding that a country without vibrant young people is bound to face unprecedented social vices and economic regression.

He charged political leaders to place God at the centre of leadership and seek direction from the Almighty, saying, “the harsh economic weather is biting hard on everyone but the youths cannot bear it, it is dangerous to mobilise them during elections and push them away, if the youths are not engaged in meaningful economic activities, the rate of crimes will escalate.”

South Africa’s Public Enterprises Minister Pravin Gordhan has stated that the strike action initiated by the country’s aviation unions over pay has caused immense damage to the reputation, operations and finances of South African Airways (SAA).

Reuters reports that the Minister said the airline group will now go through a radical restructuring process which will ensure its financial and operational sustainability as there is no other way forward.

SA’s Department of Public Enterprise says over the past few days there has been intense discussions with lenders to secure the necessary funds to cover the operational and structural transition over the next few months.

To worsen the airline’s situation, two big travel insurance companies in South Africa have stopped covering tickets issued by SAA against insolvency as doubts grow about whether the struggling state-owned airline can survive.

Reuters reports that while the move is unlikely to push SAA into liquidation by itself, it will hurt ticket sales and exacerbate a cash crunch that has left the airline unable to pay salaries on time this month, analysts say.

SAA has not made a profit since 2011 and has been struggling with an unprofitable network, inefficient planes and a bloated workforce, despite bailouts of more than 20 billion rand ($1.4 billion) over the past three years.

Its financial position worsened dramatically after November 15, when two of its largest unions began an eight-day strike over pay that forced SAA to cancel hundreds of flights.

Banks want additional guarantees from the state before they lend SAA more money, but Finance Minister Tito Mboweni has refused, leaving the airline’s finances on a knife’s edge.

Gordhan still wants to save SAA, which says it needs more than 2 billion rand ($136 million) quickly to stay afloat.

The company that administers Hollard Travel Insurance told Reuters that it had also excluded SAA from its travel supplier insolvency coverage, citing the airline’s finances.

In a letter to clients dated November 28, Flight Centre said its preferred travel insurance provider is no longer willing to cover SAA due to doubts about its long-term viability.

TIC said its reinsurers had instructed it to exclude SAA from its insolvency coverage. It did not disclose the names of its reinsurers.

Cyril Ramaphosa’s government has taken a harder line on SAA recently, saying repeated bailouts must come to an end. He is trying to preserve the country’s last investment-grade credit rating and revive growth in Africa’s second-biggest economy.

South Africa’s sovereign debt is rated “junk” by S&P Global and Fitch Ratings, but Moody’s still ranks it as investment grade, helping to prevent a spike in borrowing costs typically sparked by a downgrade from all three rating agencies.

Leitch said SAA’s liabilities exceeded its assets by a huge amount and the recent loss of confidence in the airline would force the government to decide whether to rescue it. 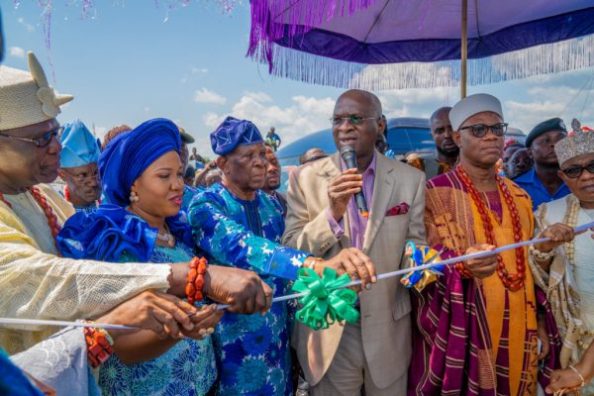 The Minister of Works and Housing, Mr Babatunde Fashola, has commended business mogul and Founder of Elizade Motors, Chief Michael Ade Ojo for his contributions toward the development of the Ilara-Mokin community in Ondo State.

His commendation was at the recent inauguration of the 6-kilometre road network in Ilara-Mokin, near Akure, Ondo State, constructed by Chief Ade-Ojo.

Fashola lauded Ade-Ojo’s commitment toward investing in the development of his immediate community.

According to him, infrastructure development plays a key role in community and national development.

“This 6-kilometre road construction which connects Ilara-Mokin and Ikota will ramp up social and economic growth to both communities, bringing transformation to Ondo State and Nigeria by extension.

“The road construction has also led to the creation of jobs for both skilled and unskilled workers, and other professionals who were involved in the project,’’ Fashola said in a statement by him.

Expressing his gratitude to Ade-Ojo, the minister said that it was remarkable for an individual to embark on an infrastructure development that contributes meaningfully to the speedy actualisation of community growth and the enhancement of the citizens’ welfare.

The occasion was graced by many dignitaries, including the Ooni of Ife, Oba Adeyeye Enitan Ogunwusi, Ojaja II, the wife of the Ondo State Governor, Mrs Betty Anyawu-Akeredolu and the Alara of llara-Mokin, Ondo State, Oba Abiodun Aderemi Adefehinti.