The actress’ marriage was offically dissolved on Thursday, January 28th at an Abuja High Court.

Music mogul, Ubi Franklin and his estranged wife, Lilian Esoro’s divorce case has been finalized and their marriage officially over.

Recall with NoRM that, Ubi Franklin and his estranged wife, Lilian Esoro divorce has been stalling after the Judge presiding over the case reportedly threw out the case stating the reasons for their divorce were invalid.

However, Noble Reporters Media gathered that the actress’ marriage was offically dissolved on Thursday, January 28th at an Abuja High Court.

The two got married in November 2015 and separated about a year after.

Lilian first filed for divorce in a Lagos High Court and it was denied and Ubi filed in Abuja and the divorce was granted. They share a 4-year-old son, Jason.

He went on to reveal that he would have taken his life if not for his four children.

He expressed himself via a series of tweets shared via his Twitter page on Sunday, December 6, 2020.

Ubi Franklin who was once married to Nollywood actress, Lilian Esoro said not having the best relationship with some of his baby mamas shouldn’t be used against him.

“Received in my 34 years on earth You can abuse me and call me all sort of names because I had them from four beautiful and brilliant women. I might not have the best relationship with some of them, marriage crashed with one, this doesn’t make me a bad person,” he tweeted.

“Many have had abortions, had several boyfriends or girlfriends you don’t know about. You know about Mine because I am a public figure. This might be my own battle, what battle are you fighting or struggling within private? Just always pray to God.”

“I would have since taken my life if I didn’t have these children. When you talk to Ariella at 15 months she loves food and when you don’t give her she warns you, very beautiful to watch her do that. Zaneta is a power ranger, she doesn’t like food, like her daddy,” he added.

“Jayden is a Daddy’s boy, he doesn’t like leaving when he comes to visit, he calls me by my name “Ubi” and when he needs something he calls me daddy. Shiloh beautiful bow legs and cute eyes will get you addicted. This and many more I enjoy from fatherhood.”

“I appreciate their mothers for the great work they are doing caring for them in my absence. We might not always agree on everything.”
Lilian Esoro and Ubi have a son, Jayden, together.

He also has a son, Shiloh, with a South African, Nicole Siyo.

His fourth baby mama is Sandra Iheuwa and they have a daughter, Ariella, together.

His first child, Zanetta, is from a relationship which many speculate was before his marriage to Esoro.

The CEO of Made Men Music Group (MMMG), Ubi Franklin has via his social media expressed his interest in the ongoing Big Brother Naija season 5, housemates, Erica and Nengi.

According to the Ubi , he wants to test so to see if his heart still works. Shooting his shot to both ladies on Instagram, he revealed, he is looking for love.

“I need to test this my heart to see wether e still Dey work.”

“E don tey weh I love.. I need to love again. Someone send me Erica, I need to check if my heart is still working

Kiddwaya get muscle no mean say I no fit take on am for Erica. Ok make una tell Nengi say I dey find love. I need to test my heart to see whether e dey work or not.”

Music executive, Ubi Ekapong Ofem popularly known as Ubi Franklin has been called out by Nigerians.

This is coming after the music artist manager and the founder of record label Made Men Music Group (Triple MG) fumbled when asked the full meaning of JAMB.

In an Instagram live session with Natalia Mufutau, Ubi brough up the JAMB discussion. When Natalia asked him what it means, he fumbled woefully as he failed to give her the correct answer.

Watch the clip below…

For the record, the full meaning of JAMB is; Joint Admissions and Matriculation board.

However, Nigerians have taken to social media to mock the serial baby daddy. See some reactions below…

Whill_ wrote: “You talked about jamb, they asked you JAMB question and you failed 😂😂😂😂😂 JOINT ADMISSIONS AND MATRICULATION BOARD OGA”

Official dota of Obi wrote: “Tacha’s make up is brighter than ubifranklintriplemg brain! Too dull abeg.”

Jyggacollins wrote: “Someone tell him it’s Matriculation not management!”

Kemi Filani News recalls that Tacha and Ubi are at logger heads. This is coming after Ubi alleged that her supposed hatred for him started after she begged him for BBNaija connection and he said he didn’t have.

He further revealed that he never wanted her to be a housemate in the reality show.

The duo later had a full blown internet fight.

The Governor of Cross River State, Ben Ayade has appointed Ubi Franklin as Special Adviser to the Governor on Tourism.

He announced his appointment on his Instagram page this afternoon.

“More so, I am most delighted to be functioning in the Tourism sector, one sector which is dear to my heart and one which I believe I fit into appropriately considering my background in the entertainment industry”.

“I thank God for His grace upon my life. I thank Governor Benedict Ayade for giving me this golden opportunity to serve. I thank my family, friends, and well-wishers for all the support and encouragement”.

“On behalf of myself and my family, I promise to work diligently and efficiently with all necessary stakeholders in ensuring that Cross River State returns to the summit of the world’s tourism index”.

Davido seems to have uncovered Ubi Franklin’s plan, as he jokingly told him to stay away from Chioma’s sister, Jennifer Rowland who he wished a happy birthday.

The exchange ensued after Ubi Franklin who wished Jennifer a happy birthday, also asked her to make him a dress they will be wearing to Davido’s son, Ifeanyi’s first birthday party.

See the exchange below; 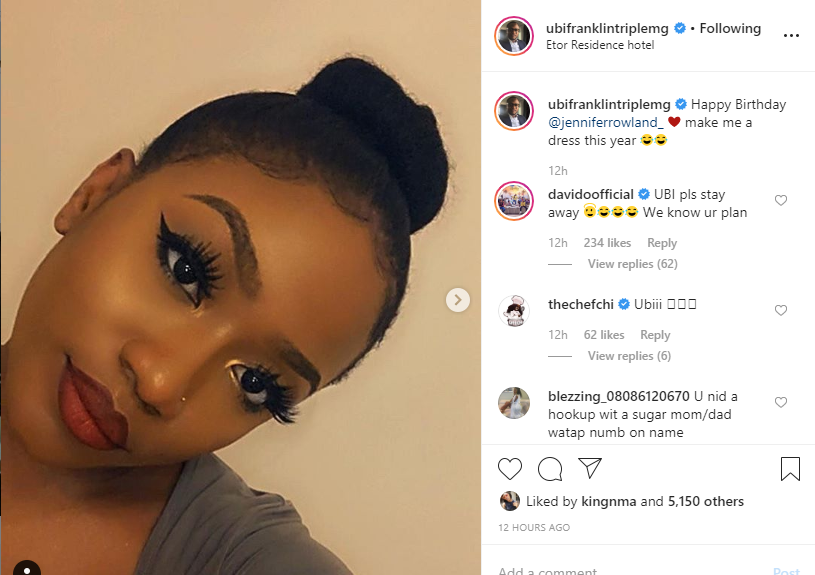