Two suspected armed robbers have been burnt to death after robbing a pregnant woman at the Abak Road Boulevard in Uyo Local Government Area of Akwa Ibom State.

Four robbers surrounded the woman when she got down from a motorbike at about 9:00pm on Tuesday night. N.Rs learnt

The motorcyclist drove off after dropping his passenger but was forced to turn back on hearing screams from the pregnant woman.

He stated that on sighting the motorcyclist, two of the robbers fled the scene after successfully dispossessing the lady of her valuables.

He however, said that the other two robbers were not fortunate as the motorcyclist immediately alerted nearby residents, who engaged in a battle with the hoodlums.

A resident of the area, Arit Archibong, lamented that the boulevard area had become a den of criminals for some years now.

She added that about four rape cases were reported within the tunnel in December 2019, blaming the crime on power outage and lack of security in the area.

Police spokesperson in the state, Odiko Macdon, confirmed the incident but frowned at the jungle justice meted out to the hoodlums, noting that such an act had no place in law.

There is a standoff currently going on in Mpape in Abuja between a gang of armed robbers, the police and Nigerian Army after the hoodlums invaded a first generation bank.

The armed robbers were said to have stormed the bank, shooting sporadically into the air to scare people away.

They were said to have succeeded in gaining entry into the banking hall.

Shortly after gaining access, the police and army arrived the scene but the robbers had refused to come out of the bank.

It was gathered that one of the robbers, attempted to force his way out was shot but remained indoor with gunshot injury.

As at time of filling this story, the security agents were making efforts to break into the bank and end the siege.

OAP Lolo 1 has narrated how she got robbed of her phone and N300k by robbers who attacked her after leaving Teni’s concert on Monday evening.

The media personality revealed that the thieves stole N300k from her 3 bank accounts using her BVN before she could block the account on Tuesday afternoon.

OAP Lolo 1 who told everyone to be careful during this festive period, added that she is thankful even though the robbery attack “shook her”.

I have been off the gram since Monday night..my phone was stolen in traffic after I left @tenientertainer show..it was plucked out of my hand..phew

By Tuesday afternoon the thieves have taken about 300k out of 3 of my banks account..using my BVN number …before I could block my accounts.
We need to be more security conscious this season ooo
It shook me a little but I’m still thankful!

The Ebonyi Police Command on Thursday said it had uncovered a new strategy used by criminals to rob bank customers.

The command’s spokesperson, Mrs Loveth Odah, made this known in Abakaliki.

Odah warned members of the public, especially bank customers, to always be security conscious whenever they make bank transaction.

According to her, the new strategy involves trailing their victims through a female member of their syndicate who are usually monitoring financial transactions around banks’ premises.

Odah said that such members of the syndicate usually hang outside the banks with cellophane bag containing nails that were usually planted either at the front or rear of the victims’ vehicles.

“As soon as the target comes out from the bank, enters the vehicle, he climbs the unsuspecting bag of nails that automatically punctures the tyres.

“The same people will follow you on a bike and will be showing you that your tyre is deflecting and as an unsuspecting citizen; you will stop the car, alight reluctantly to check your tyre without closing your door.

“They will reach out into the car, collect the money in your car without any stress and without shooting a gun, take it and speed off.

“The new strategy has been used to rob some bank customers by the criminals and we have arrested some of them including a woman who confessed their involvement in the crime.

“We are using this opportunity to alert the public on this latest antics of criminals and to advise bank customers to use security when withdrawing huge amount of money.

“Also car owners should always ensure that they use the car central lock while driving and whenever they alight from the car,’’ Odah said.

The spokesperson said that the command was fully prepared to protect the lives and property of every citizen before, during and after the Yuletide.

“The Christmas period is a season we usually experience heavy human and vehicular traffic with attendant social ills.

“Bad elements in our midst will want to exploit the season to break the law by committing all sorts of crimes.

“Though, Ebonyi is relatively crime free and the most peaceful in terms of crime in the South-East zone, we are still not going to relent in ensuring that we maintain the status quo.

“We urge the public to cooperate with the police and when they see something, they should say something and a quick response by the police in crime situation will help put smiles on the victim or victims’ faces.

“We have given out distress call numbers so that the public can reach us promptly and we are assuring members of the public that police and other security agencies will ensure adequate protection of lives and property of the citizens,’’ she added.

The spokesperson also advised parents not to leave their children in isolated places to avoid being preyed upon by suspected ritual killers and child traffickers.

According to reports, the incident occurred at 9:00am when the operators were starting the business of the day.

“The robbers disguised as clients seeking to exchange currency and then beckoned Hamisu to come. They swiftly grabbed his Ghana-Must-Go bag which was fully-loaded with local and foreign currencies, including dollars, pounds sterling and euros,” said a witness.

“Alhaji Naira then held his bag tightly and refused to let go. He challenged the attackers because it wasn’t his money alone in the bag, and as a result they shot him and fled with the money. The gunshot drew everybody’s attention in the market. We just saw Alhaji Naira’s body lying in the pool of his blood. Some of the marketers around hurriedly took away the corpse, and then we contacted the police immediately,” the witness added.

The deceased, who hailed from Hadejia Local Government Area of Jigawa State, has since been buried according to Islamic rites. 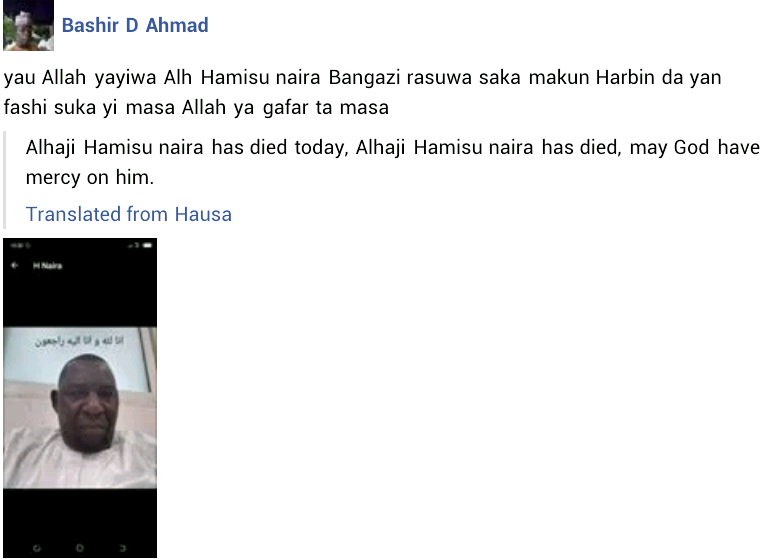 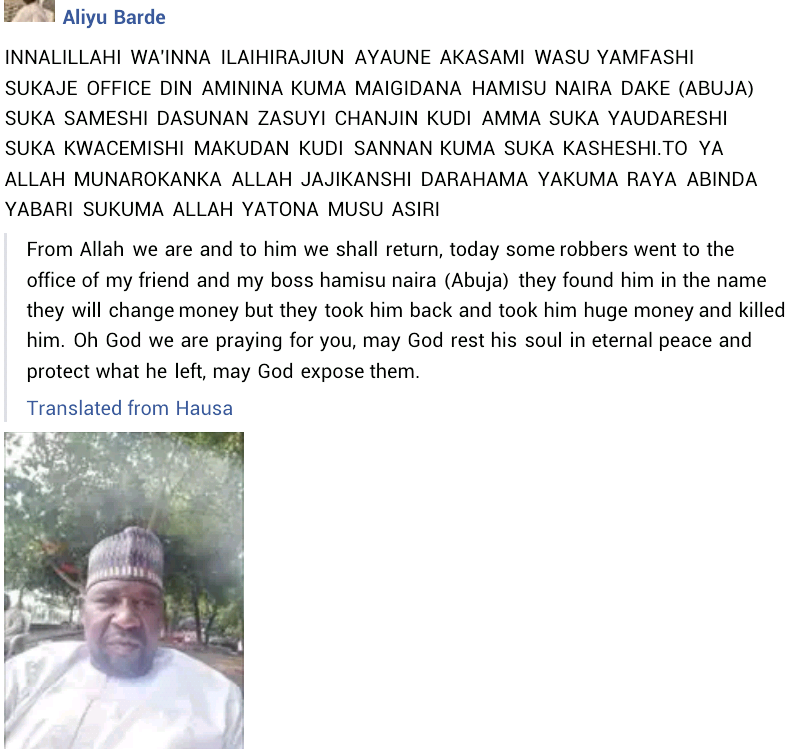 The bus conveying the players scheduled to play Jigawa Golden stars at the Kano stadium on Sunday December 1 was attacked in Kabba, Kogi state.

No life was lost in the attack but it was gathered that the driver and a player were hit by bullets fired at the bus.

Chairman of the club, Chukwuma Ubah who confirmed the attack told newsmen “Our bus was attacked by gunmen in Okene. The driver and a player was hit by bullets fired at the bus. They have been taken to a hospital nearby where they are being attended to. We thank God that no life was lost.”

The Club in its statement said the players were attacked by a gunman who wore NYSC uniform. Injured victims of the attack which ocurred by 1:30pm today have been taken to the hospital.

“This is to inform the general public that at about 1:30pm today, players of FC Ifeanyi Ubah (Anambra Warriors) who were travelling to Kano for their scheduled NPFL match day 6 fixture against Jigawa Golden Stars ran into a group of armed robbers dressed in NYSC uniforms, operating at Kabba junction, near Lokoja in Kogi state,” the statement read.

“To the glory of God, no life was lost. However, the driver was shot while some members of the coaching crew and players were critically injured. The affected persons are currently being treated and are responding to treatment.

“We wish to use this medium to appeal to the Federal Government as well as football regulatory bodies; Nigerian Football Federation(NFF) and the League Management Company (LMC) to further intensify security efforts to ensure the safety of teams who often have no choice than to travel long distances by road, especially clubs owned by Private investors who are made to invest their hard earned money in the growth and development of Nigerian football.

“Conclusively, fans, well wishers, supporters and Nigerians in general are kindly urged to keep the entire management, coaching staff and players of FC Ifeanyi Ubah in their prayers in this moment of despair.”