COVID-19: 12-year-old children and above should wear face mask – WHO.

COVID-19: WHO warns under 50s that may not know are positive in Asia.

COVID-19: WHO urges countries to make research on vaccine.

COVID-19: WHO warns against despair as global cases crosses 20 million.

President of Madagascar, Andry Rajoelina has claimed that the World Health organisation, WHO, offered his country the sum of $20m as bribe to poison COVID-19 cure, according Tanzania Perspective.

The President went on to insist that the herbal remedy called ‘COVID Organics’ made from Artemisia can cure COVID-19 patients within ten days.

Also appearing on France 24 News, Rajoelina said that the only reason the rest of the world had refused to take the herbal cure seriously and with respect was that it came from Africa.

“I think the problem is that (the drink) comes from Africa and they can’t admit… that a country like Madagascar… has come up with this formula to save the world.

“If it wasn’t Madagascar, and if it was a European country that had actually discovered this remedy, would there be so much doubt? I don’t think so,” Rajoelina said.

“What is the problem with Covid-Organics, really? He asked. Wondering if it could be that this product comes from Africa,” he added.

The President also wondered if it was not alright for a country like Madagascar, which is the 63rd poorest country in the world, to have come up with something that can help save the world.

He noted that if it was not Madagascar, but an European country that had actually discovered the Covid organic, there would not be so much doubt.

A househelp identified as Uche Soroibe from Ideato in Imo State has been caught on his third attempt of poisoning his boss and his family members with an insecticide ‘Sniper’.

Uche who was paraded alongside the poisonous chemical he tried killing the family with, initially claimed he wanted to commit suicide with it.

Upon being pressed further by those interrogating him, Uche confessed to attempting to kill his boss’ family after losing N750k which belonged to the man that employed him to fraudsters.

He claimed the fraudsters he met at a bus stop in Oyingbo area of Lagos state, promised to refund the money after using it for an undisclosed business. Uche said he only met the fraudsters once after which they gave him an account number to pay in the money.

Uche said because he lost the money, he decided to kill his boss’ family with the insecticide. On his first attempt, nothing happened to the family. On his second attempt, his boss’ wife found out and poured away the soup. He was however caught on his third attempt.

A popular Warri-based prophetess has died after allegedly being poisoned by junior pastors in her ministry who wanted to take over from her.

Fellow religious leaders took to Facebook to mourn Prophetess Success Oni Onwaeze, who was the General Overseer of Salvation Solution Centre of All Nations. The religious leaders claim Prophetess Onwaeze was poisoned by “pastors in her ministry in a bid to hijack the church from her.” 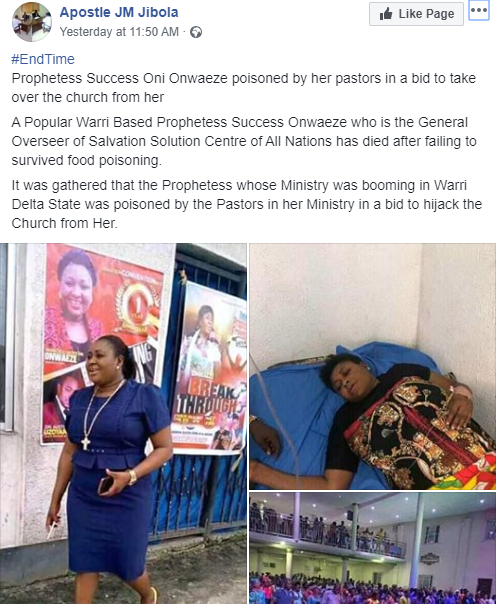 A message. alleged to have been sent by the Prophetess before her death, shows her revealing she’s been admitted to the hospital, and she accused her pastors of poisoning her. 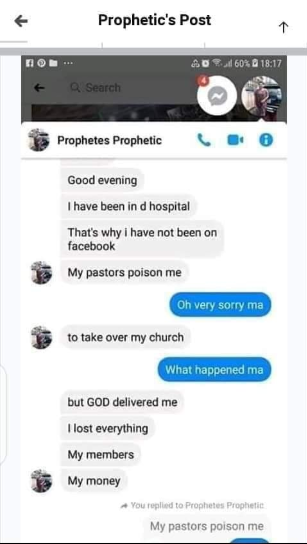 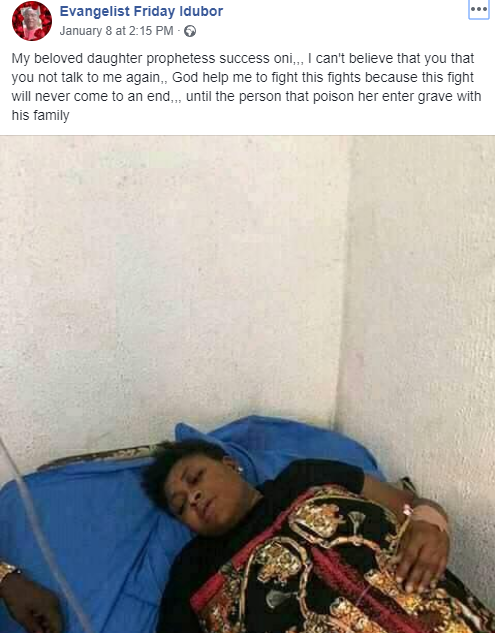 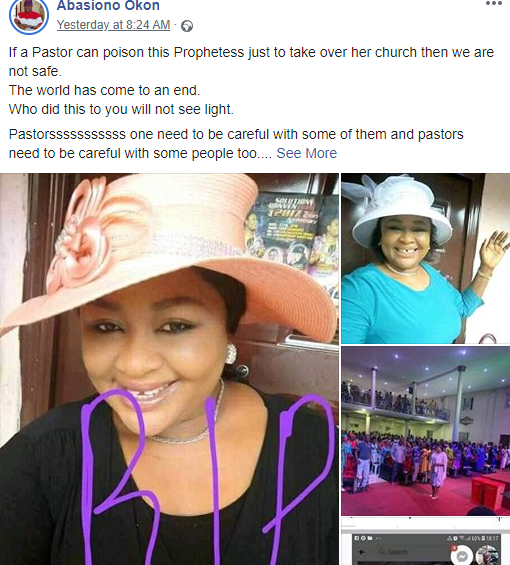