Comedian, AY and his wife, Mabel are celebrating their daughter, Michelle, who turned a year older today.

Proud father, AY shared the adorable family photo above and wrote; ‘A virtuous daughter is one of the greatest achievements in any Dad’s life. Having a good and beautiful daughter is the greatest gift of life. Happy Birthday, Michelle Adeola Makun. You’re great in all aspects of life. May God continue to bless you.’

However, Trump’s wife Melania failed to match the popularity of Obama’s wife, Michelle, who was named as the most admired woman for the second year. She had 10 percent of respondents naming her, down from 15 percent last year. Melania Trump came in second at 5 percent.

This is the first year Trump has risen to the top spot in the annual survey and the 12th year for Obama. Each was named by 18 percent of respondents to the open-ended survey conducted December 2-15.

Obama tied former President Dwight Eisenhower for the most times named as most admired man since the survey began in 1948.

The survey reflected the political divide in the nation, with 41 percent of Democrats naming Obama and 45 percent of Republicans naming Trump. The results also reflect Trump’s rise in popularity, with a 45 percent job approval rating up from 40 percent in 2018 and 36 percent in 2017, Gallup noted.

The incumbent president has taken the top spot in 58 of the 72 prior Gallup polls. Other men in the Top 10 this year were former President Jimmy Carter, businessman Elon Musk, Microsoft founder Bill Gates, Pope Francis, Vermont Sen. Bernie Sanders, California Rep. Adam Schiff, the Dalai Lama and investor Warren Buffett, though none earned mentions from more than 2 percent of respondents.

Former First Lady Michelle Obama has described the current impeachment hearings against US President Donald Trump as ‘surreal’, her first comments about the political situation since it started. 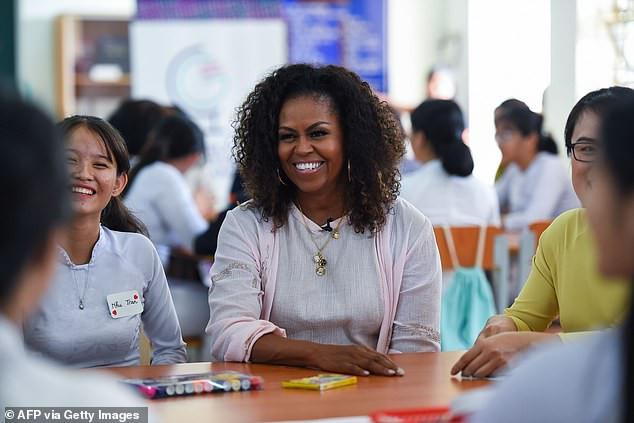 Trump is being investigated by the US House of Representatives for alleged bribery and obstruction of Justice as regards a July phone call where he allegedly withheld military aid to Ukraine in anticipation of the Ukraine government investigating his political rival, Joe Biden, and on Monday that House started Improvement hearings, with Democrats hopeful of Trump’s impeachment before the year’s end. 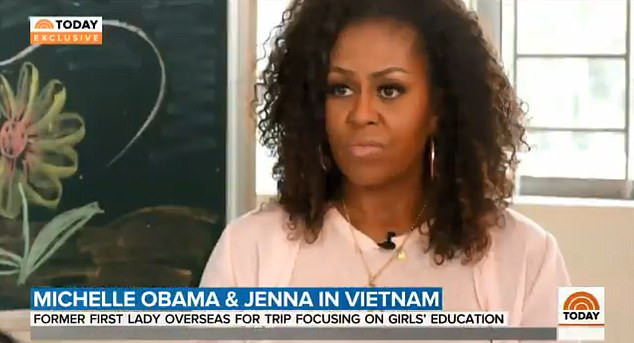 The former First Lady, now 55, spoke with host Jenna Bush Hager on the Today show on Monday from Vietnam as during her first public overseas trip since leaving the White House. 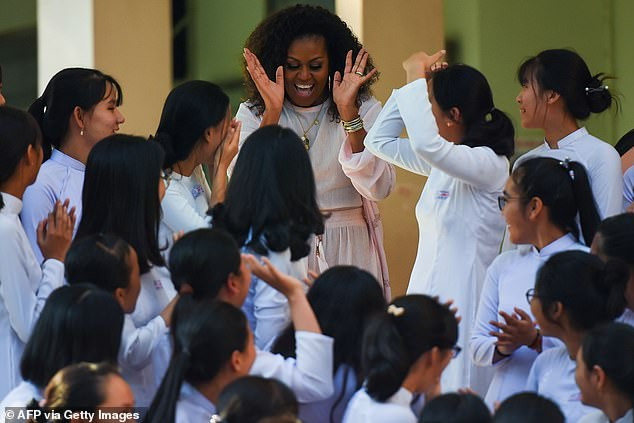 When asked what she thought of the impeachment hearings currently engulfing Trump she said: ‘It’s surreal I think. The last impeachment hearing, a lot of young people weren’t around for that. So this is all new, I don’t think people know what to make of it.

And that’s what we have to continue to believe because what’s our choice? To ball up in a corner and call it a day? Well that’s not fair to this next generation coming before us that are counting on us to get this right,’ Obama said.

‘It’s not an “us or them,” it’s not an “R or a D” (Republican or Democrat), we are all here as part of this country. We all want the same things, it’s just sometimes that gets lost in the noise,’ she continued.