President Muhammadu Buhari has asked the Senate to confirm the appointment of his Special Assistant on Social Media, Lauretta Onochie, and three others as commissioners of the Independent National Electoral Commission.

“Appointment for commissioners for INEC. Pursuant to paragraph 14 of part 11 of the first schedule of the 1999 constitution,” Buhari said.

Presidential aide, Lauretta Onochie is one of the quite few people who find the video of the little boy who told his mother to calm down when she was about to discipline him, disturbing as she says it’s a clear case of child abuse.

The President’s aide, in recent tweets on her page, stated that a lot of Nigerian adults today are suffering from the effects of similar abuse when they were children. She added that laws needed to be made to protect children in the country.

the calm down video, is a clear case of child abuse. That was not discipline.
TIMES HAVE CHANGED
2020

Many Nigerian adults today, are suffering from the effects of similar abuse when they were children.

In the UK, the child would be in care, his mother charged

I was distressed by the calm down video. I can’t imagine the trauma that child and other children who watched it, went through.

We must make laws that protect children in our nation

According to the statement she made on her verified Twitter handle, The Presidential Aide is of the opinion that Hushpuppi was part of the strategy of the People’s Democratic Party when some of its members travel to Dubai in 2019 to strategize on how to win the 2019 Presidential election.

“The Dubai Strategy. #Hushpuppi was very prominent in the strategy to change the government of the federal Republic of Nigeria through the back door.@YakubDogara @DinoMelaye, Timi Frank and so on, were there.In spite of denials, we know them. There’s nothing hidden under the sun”

Former Vice President Alhaji Atiku Abubakar had traveled with some PDP members to Dubai after he won the PDP Presidential primary. Mrs. Onochie also thinks that there is something that the PDP know about Hushpuppi that they don’t want to tell Nigerians.

Dino Melaye, Yakubu Dogara and Timi Frank whom she mentioned have all denied having any relationship with Hushpuppi apart from taking pictures which they did with him in Dubai.

…when I was on their matter, they were crying

Earlier today, President Buhari’s media aide, Lauretta Onochie reacted to a video of former Governor of Ekiti State, Ayodele Fayose dancing with a white woman after being granted permission to travel out for an emergency medical treatment by a Nigerian court.

In his response, Fayose took to Twitter to say,

‘these “hailers”, when I was on their case,they were crying. Now I’m on my own lane enjoying my life, they are still crying & sucking.Expect more so you can cry more. I’m on medical check up not admission. Celebrating New Year is my right, haters can hug transformer. Happy New Year’.

‘Once again, Happy New Year to everyone, particularly my haters politically or otherwise. How far can you go in your machinations? Definitely nowhere. Remember; “He that is blessed of God cannot be cursed.” I will remain your headache in 2020 if you don’t repent’. 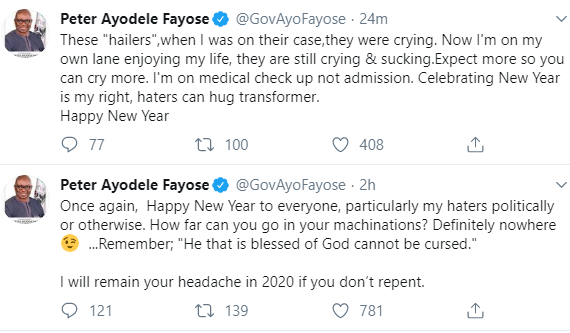 Lauretta Onochie, President Buhari’s aide on Social Media, claims yesterday’s re-arrest of Omoyele Sowore in court was staged by Sowore’s supporters. She said this in a writeup posted on her Facebook page this afternoon. Read below

WHO DRAMA EPP? EVERY LIE WILL EXPIRE.
COURTROOM DRAMA EXPLAINED.

So it was a stage managed drama in the court yesterday; Sowore pinned down by his supporters in a courtroom in order to give DSS a bad name.

There was no gun. No batton. No pinning down. Just plain drama, planned and staged by his boys and girls. Kudos, but every lie has an expiration date.

A friend of mine, Wale Fapohunda, who was in court today when Sowore’s re-arrest was purportedly effected inside the courtroom has this to say about the incident ??:

“Okay, so I was in court today and here is what happened.

The court had adjourned his matter till 11th Feb next year.

Suddenly Sowore’s people started dragging him with the DSS and they (Sowores team) dragged him into the court room.

The judge seeing this, rose and went to her chambers.

The DSS didn’t enter the court room to arrest him rather his supporters dragged him in with the DSS official.

Nobody chased the judge out, she rose and went to her chambers on seeing squabbles.

The DSS official left the court room and waited for him outside the court.

????????
Blackmailing government enforcement agencies was how our nation went into decay. It wont work this time. NO ONE IS ABOVE THE LAW.

It appears everyone in that drama was part of the drama club. They harassed a Court officer who wanted them out as they were disrupting another court case. A Lawyer who looked bemused with the whole drama was lost for words.

Drama will not help Sowore because Once you dramatise a lie to the members of the public to attract sympathy, you lose all of that sympathy when they find out you have misled them.

I’m also of the opinion that the police look into these videos, (I have watched four) and charge those who deliberately misled the general public on this issue.

The former Vice President of Nigeria, Atiku Abubakar has made good his threat to institute a N2.5bn libel against a Presidential aide, Mrs Lauretta Onochie over an alleged libellous publication.

He was at the Registry of the Federal Capital Territory High Court in Maitama where he formally deposed to his own witness statement on Oath before the Commissioner for Oaths to kick-start the libel suit against Onochie, an aide of President Muhammadu Buhari.

Atiku, who was the candidate of the People’s Democratic Party (PDP) in the February 23, 2019, presidential election, had in May this year threatened legal action against Onochie, who is the Special Assistant to President Muhammadu Buhari on Social Media.

The legal action was in connection to a publication wherein, Onochie on her twitter handled, alleged that Atiku is on the watch list of security operatives in the United Arab Emirates (UAE) for alleged criminal matters.

Onochie in the said publication of May 7, 2019, also accused Atiku of shopping for terrorists in the Middle East.

“Atiku on UAE watchlist – security sources; Security operatives in the United Arab Emirates are keeping a close tab on a former Nigerian Vice President, Atiku Abubakar, who has been in Middle East nation for several weeks now. What is he doing there? Me: shopping for terrorists?

The PDP presidential candidate insisted that there is no iota of truth in the said publication which is beginning to affect public perception of his person, adding that, the publication since it was made has caused him national and international backlash and embarrassment as well as incalculable damages.

Atiku while challenging the victory of President Buhari in the February 23 presidential poll at the Presidential Election Petition Tribunal and the Supreme Court was in the United Arab Emirate (UAE) until last week when he returned to the country.

This move was confirmed to Channels TV by his lawyer, Mike Ozekhome who described Onochie’s statement as not only vile and denigrating but a calculated attempt to disparage his person in the eyes of right-thinking members of the public.