The Registrar and Chief Executive Officer, Chartered Institute of Bankers of Nigeria (CIBN), Seye Awojobi has commended Ecobank Nigeria’s various initiatives targeted at building the capacity of its workforce.
The Registrar made this disclosure while speaking at the graduation ceremony of Ecobank pioneer management trainees in Lagos.

Awojobi, who was represented by Group Head, Membership Services, CIBN, Akin Morakinyo observed that over the years, the bank has accorded priority to various learning and development initiatives that expose staff to new career development within the banking industry.
He emphasized that such competency improvement was important for the banking sector, stressing that it aligns with the current dynamics of the industry and global best practice.

Awojobi encouraged the young graduates to “make it happen”, by doing everything possible to excel in their chosen area in banking.
“You should see yourself as change agents. For you to grow in your career, you must possess integrity and honesty; you must also be consistent and aspire to achieve. Strive to do what is right at all times,” he noted.

Alluding to the state of the art equipment, syllabus and faculty of the Ecobank Academy, Awojobi disclosed that CIBN had granted exemptions in some of the courses in its professional examinations to graduates of the Academy.
He therefore urged the young graduates to take advantage of the Ecobank waiver to become chartered members of the Institute.
Also speaking, Managing Director, Ecobank Nigeria, Patrick Akinwuntan, charged the graduates to discharge their duties and assignments with a high level of professionalism.

He stressed that Ecobank is a veritable platform for them to excel and attain their career aspirations.
According to the Managing Director, “Ecobank is a great place for you to exhibit what you have been taught in the last 18 months in this Academy. It is a place where you can achieve your career goals. Be ready to discharge your task effectively and efficiently and note that your future in the bank starts now.”

Akinwuntan reiterated that Ecobank is highly committed to delivering on its promise of investing in creating leaders for the banking industry.
Ecobank Transnational Incorporated, Group Head, Talent, Learning and Organisational Development, Simon Rey, emphasised the power of synergy. He noted that young graduates need each other to excel and succeed in their job functions and career in the bank.

In his opening address, Acting Head, Human Resources, Ecobank Nigeria, Adekunle Adewuyi advised the young graduates to adhere strictly to the bank’s core values.
He said the core values should be internalized as a driving force to become credible bankers.

A student of the Nigerian Institute of Journalism, Ogba, Lagos, Anjola Ogunyemi, has said she is not returning to the school after being allegedly sexually assaulted by one of her lecturers, Tene John, as she no longer feels safe.

Ogunyemi said she feared that she would be victimised by other lecturers of the school for allegedly causing John to lose his job.

NobleReporters learnt that Ogunyemi was allegedly assaulted by John on December 13, 2019, in his office.

It was gathered that the victim petitioned the school management to demand an investigation into the incident.

Our correspondent learnt that upon the receipt of the petition, the management of the NIJ set up a panel to probe the allegation.

The school, in a statement by its Registrar, Dotun Adeniji, on Monday, announced John’s dismissal after the conclusion of the investigation.

The statement read in part, “Our attention has been drawn to a post on the social media by one of our students, Ms Anjola Ogunyemi, a National Diploma 1 student, alleging sexual harassment by one of our part-time lecturers, Mr Tene John.

“Ms Ogunyemi’s petition to the school on the alleged sexual harassment was received on December 19, 2019, the day of our vacation. And the Provost called her on that same day to acknowledge receipt of her petition and assured her that the matter would be looked into appropriately.

“The institution, thereafter, set up a panel of three lecturers – two females and a male. The panel sat and took evidence from the two parties and the witnesses concerned. On Friday, January 17, 2020, the last day of its sitting, the accused and the accuser were made to confront each other at the panel.

“It was difficult for the panel to establish concretely a case of sexual harassment in its report, because there were glaring contradictions in the testimonies of the two parties and witnesses. We wish to place on record that Ms Ogunyemi walked out on the panel and ran to the social media to tell her story on the day of the panel’s final sitting.

“In view of our institution’s zero tolerance for improper conduct on the part of the staff and students, and in the light of the interest the matter has generated, the following decisions have been taken: the lecturer concerned, Mr Tene, who has been on our faculty for over a decade, has been relieved of his appointment; we thank him for his services and wish him the best of luck in his future endeavours.

“Ms Ogunyemi, who has just returned from a one-year suspension over indecent dressing and gross misconduct, is advised to adhere strictly to her matriculation oath of channelling her grievances to the authorities of the institution.

“We wish to reiterate that our staff and students are governed by rules and regulations and it is important that we comply accordingly.”

The 22-year-old victim, who spoke with our correspondent on Tuesday, stated that going back to the school would be like walking into a trap.

She said, “I was sent a message that the lecturer had been sacked and I think the school took the right decision, because I feel he has got what he deserves, but at this point, I am not going back to the NIJ. I am done with the school, because I was suspended for one year and coming back, I had to face a sexual assault, which investigation dragged too long before a decision was made.

“I feel that there is nothing left for me in the school; other lecturers, who are John’s friends, are obviously upset that I caused the loss of his job; so, if I go back to the school, it will be difficult for me to pass through the system.

“As far as I am concerned, I am no longer a student of the NIJ. I will wait and write the UTME again and get into a university where I can feel comfortable, safe and not feel that anyone is watching me.”

Ogunyemi urged other students of the school, who had experienced sexual assault from lecturers, to speak up for the sake of their mental health, adding that she almost lost her mind when the incident happened.

The Christian Association of Nigeria (CAN), Kwara State chapter, insisted State Government has not banned religious activities in public schools.

The defence was issued on Saturday despite government order on such activities to stop. NobleReporters said

Commissioner for Education and Human Capital Development, Mrs Fatimoh Ahmed, had on January 14, issued a statement that no religious organisation is permitted to go to public schools for preaching or engaging in any religious activities during the morning assembly.

The statement added that prayers should be said silently on the morning assembly across public schools in the state.

However, the Christian body in a statement signed by its Secretary, Rev. Reuben Ibitoye, reads; “The attention of the Christian Association of Nigeria, Kwara State chapter, has been drawn to an online publication titled ‘KWARA GOVERNMENT BANS PREACHING IN PUBLIC SCHOOLS’.

“In response to the purported press release by the government dated 14/1/2020, banning religious activities in public schools.

“The government of Kwara state decided that the Status Quo should be maintained in all public schools, after the Secretary of the Ministry of Education, in Ilorin West Local Government issued directives to schools to start observing two separate morning assemblies and devotions one for Christian pupils and the other for Muslim pupils.

“The position of Kwara state government and stakeholders on issue of morning assembly and devotion was that: there shall not be two devotions on assembly in public schools.

“The devotion and assembly shall be led by the school Principal whether in Christian schools or Muslim schools in line with the faith of the Proprietor,” the statement read in part.

The Economic and Financial Crimes Commission, EFCC, was on Friday January 17, 2020, announced as the winner of THISDAY Newspaper’s Institution of the Decade Award.

The Newspaper will present the Award to the Commission in commemoration of its 25th Anniversary which comes up on Monday , January 20, 2020, in Lagos.

Thisday Board said the EFCC, after a painstaking selection emerged the Institution of Decade along with the Central Bank of Nigeria (CBN). Twenty four different winners emerged, two in each of the 12 categories announced by the Newspaper.

The Commission’s profile as the strongest anti-corruption institution in Africa earned it the Award after meeting the Board of Editors’ standard.

According to the Board, which considered strength of industry knowledge and professional advice, nominated the Commission based on its public engagement and enlightenment, training and capacity building, sensitisation, arrests, convictions, asset recoveries, prosecution and competence in the fight against corruption.

“Since its establishment in 2003 by the Olusegun Obasanjo administration, the Economic and Financial Crimes Commission, (EFCC), remains Nigeria’s foremost anti-graft agency”, the Statement read

It also stressed that, “Its zeal to achieve its mission statement of ridding Nigeria of economic and financial crimes and coordinate the domestic effort of the global fight against money laundering and terrorists financing, has birthed a new public order, especially in spending public funds. This new conscience has now earned it the editor’s pick as the institution of the decade”.

In the last decade, the Commission recorded 2,447 convictions; and billions of cash recoveries in local and foreign currencies. It has also addressed financial corruption and money laundering by prosecuting and convicting a number of high-profile corrupt individuals, ranging from Nigeria’s former chief law enforcement officer to several bank chief executives, governors, senators and captains of industries.

The Commission made considerable efforts towards building public consciousness against graft and unbeatable consistence in fighting corruption in Nigeria. It stands tall as the topmost corruption- fighting agency in Nigeria commanding high regards among Nigerians and the International Community. 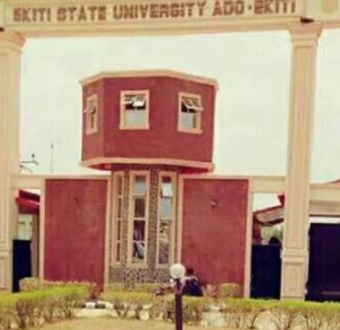 …call on the institution’s authority to reverse the decision

Workers of the Ekiti State University, Ado Ekiti grounded academic activities at the institution on Monday, December 9th over mass retrenchment in the school.

The institution had on December 5 sacked over 900 workers institution who alleged to have been recruited between 2016 and 2017, during the tenure of Governor Ayodele Fayose, have been sacked.

Discrepancies were said to have been found in the certificates of some of the affected workers, while others were also found not to possess the requisite certificates from the primary level. The lecturers who protested within and outside the institution’s campus blocked the entrance gate as early as 7: 45am and chanting solidarity songs.

The protesting lecturers barricaded major roads and prevented vehicles from either leaving or entering the campus. The protesting workers who were led by the major in various unions in the institution under the aegis of Joint Action Committee were seen carrying placards with various inscriptions and chanting solidarity songs.

Addressing journalist, the NLC chairman in Ekiti state who dubbed as the SSANU chairman of the institution, Mr Kolawole Olatunde said the struggles would be a fight to finish between Labour and the management. He said the action of the management was uncivilized and inhuman .

The labour leaders, equally, urged Governor Kayode Fayemi to call on the institution’s authority to reverse the decision to guarantee industrial harmony.