Okeke in his suit alleged that during the riot, properties were destroyed and the defendants who promoted the #EndSARS protests must be held responsible for it and also brought to justice.

A Federal High Court has stopped and drop the charges against Pastor Sam Adeyemi of Daystar Christian Centre, Burna Boy, Davido, Falz, activist Deji Adeyanju and others over the #EndSARS protest.

NoRM gathered that the High Court ordered a Magistrate court to instantly stop proceedings and stay action against 50 persons who supported the #EndSARS protests, following a criminal accusation filed by lawyer Kenechukwu Okeke.

Justice Bello Kawu who delivered a judgement on the application filed by Activist Deji Adeyanju (one of the defendants) for a judicial review of the substantive matter before the magistrate, said;

“An order of this honourable court granting leave to the application to issue and serve on the defendant an application for judicial review against the proceedings/direct criminal complaint of Hon. Omolola Tolulope Akindele sitting at Chief Magistrate Court II, Wuse Zone 6 in the suit of Kenechukwu Okeke Vs Deji Adeyanju and 49 others in suit No. CR/49/2020.

“An order of this honourable court, that on the grant of the above orders herein, serve as stay of all proceedings on the direct criminal complaint Omolola Tolulope Akindele sitting at Chief Magistrate Court II, Wuse Zone 6 in the suit of Kenechukwu Okeke Vs Deji Adeyanju and 49 others in suit no. CR/49/2020.

“An order of this honourable court, that on the grant of the above orders herein, same order as granted by the honourable court shall restrain the Nigeria Police Force, 2nd and 3rd defendants from taking any further steps, arresting and or taking any unconstitutional/illegal steps in the form of any guise as it concerns the subject matters whatsoever before this court herein as it concerns all parties in the proceedings.”

Sowore and others were arrested while embarking on a procession to enter the New Year.

Human rights activist, Omoyele Sowore, has commenced hunger strike in police detention as he rejected all the foods and clothes taken to him by his family.

This was due to the refusal by the police to allow the relatives of the activist who had brought some of his books to him in the custody, give them to him.

Injured Sowore in custody of the Nigeria Police
Sowore had asked one of his brothers to bring his books for him to read and refresh his mind but he was prevented from taking the books inside.

The action compelled the activist to reject the foods, clothes and other items that were brought for him.

He vowed not to eat any of the foods unless the police allowed him to have access to his books.

He said, “I cannot feed my stomach when I haven’t fed my brain.”

Also his colleagues, who were arrested alongside him, have joined in the hunger strike.

It will be recalled that Sowore had earlier been arrested on August 3, 2019, in Lagos by the Department of State Services, Nigeria’s domestic intelligence agency with a history of repression.

He was moved to the agency’s headquarters in Abuja where he was illegally detained for 144 days despite different court orders for his release.

The DSS accused Sowore of baseless crimes like money laundering. The security agency claimed he was plotting to overthrow President Muhammadu Buhari even though it failed to produce evidence to substantiate its claim.

Adeyanju said with the spate of bandits’ activities, Buhari may be kidnapped soon by those criminals.

In a tweet, the convener of Concerned Nigerians lamented that Nigeria is going down daily under Buhari.

“Bandits have also abducted 7 police officers in Niger State. They killed one officer in the process.

“Bandits may abduct Buhari soon. Our country is going down daily but Buhari is busy hailing himself,” he tweeted.

Bandits were said to have ambushed the officers in Mariga Local Government Area of the State.

The incident had led to the death of one of the officers, while others were abducted by the bandits.

While many people have alleged that this is a political move by Sowere, others feel that it is a legit move to end SARS permanently.

The End SARS protest started a few weeks ago after a series of killings were carried out by the officers of the NIGERIA police.

The protests ended abruptly on the 20th of October, 2020 after the alleged Lekki toll gate shooting.

While many have decided to take their protest online, Sowere who is the leader of the “Revolution now” group has a different idea.

He has painted a major road in Abuja with the EndSARs words while he and his small group kept chanting EndSARs now.

The IGP also ordered all operatives of the disbanded SARS to report in Abuja for debriefing and medical examination.

Deji Adeyanju, popular activist, has reacted to the formation of a new unit to replace the disbanded Special Anti-Robbery Squad, SARS.

Adeyanju, who is the convener of Concerned Nigerian expressed hope that the police won’t deploy criminals to man the new unit.

Recall with Noble Reporters Media that the Inspector General of Police, IGP, Mohammed Adamu had announced the formation of the Special Weapons and Tactics (SWAT) Team to “fill the gaps” arising from the dissolution of SARS.

However, Adeyanju in a tweet wrote: “They have created another unit called SWAT. Hope they are not planning to redeploy the same armed robbers there? #SARSMUSTEND”

Human rights activist, Deji Adeyanju who is currently recuperating in a Dubai hospital has claimed that the leadership of the SSS is behind the attack that got him hospitalised.

According to him, the SSS contracted a Kano based tout to carry out the attack on him during a “Free Sowore” protest in Abuja on December 23rd. 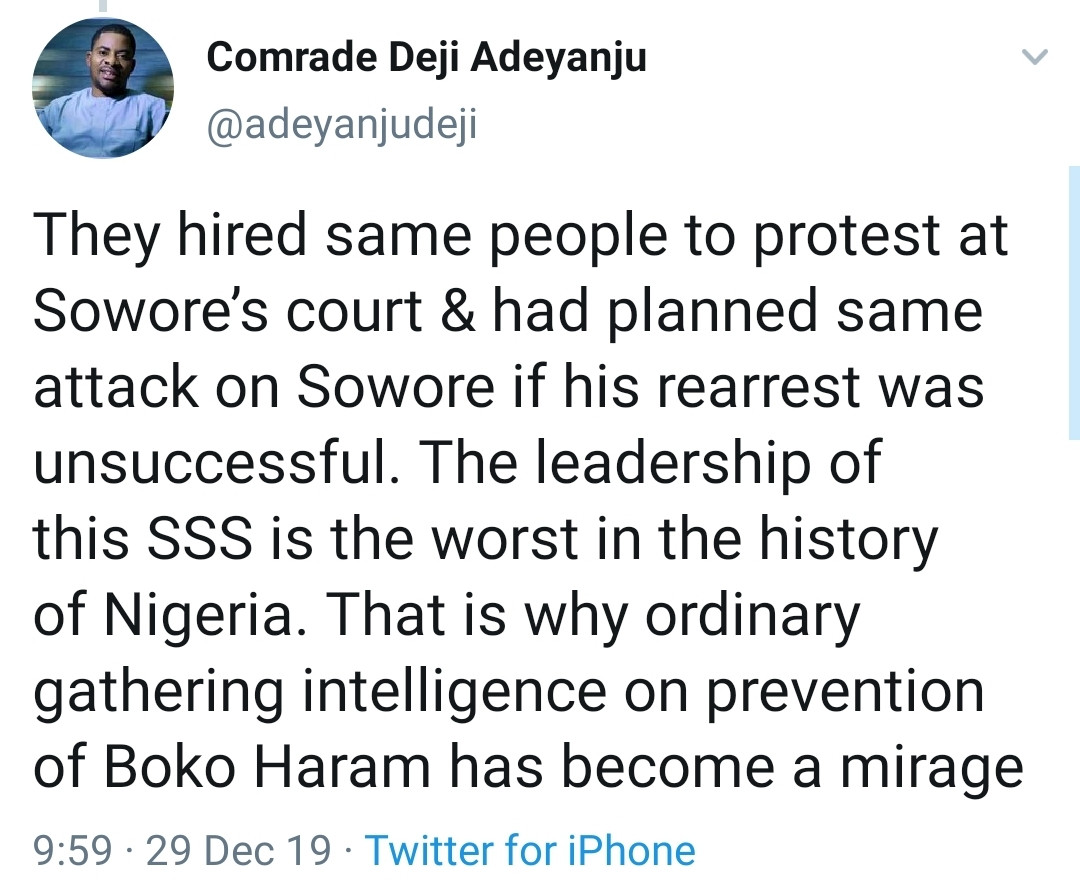 …first time I’m getting up

Human rights activist Deji Adeyanju has returned to social media five days after he was attacked and suffered injuries after allegedly being beaten by hoodlums during a Rally in front of the National Human Rights Commission.

From a Dubai hospital where he’s being treated, Adeyanju wrote, ‘first time I’m getting up since I got to the hospital. Thank you to our leader in the struggle Dr Joe Odumakin for this inspirational visit & prayers. I feel blessed. Many are the afflictions of the righteous: but the LORD delivereth him out of them all. ALUTA CONTINUA’. 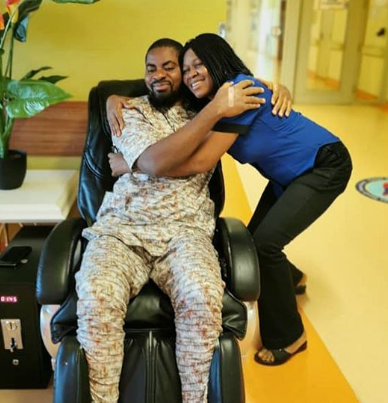 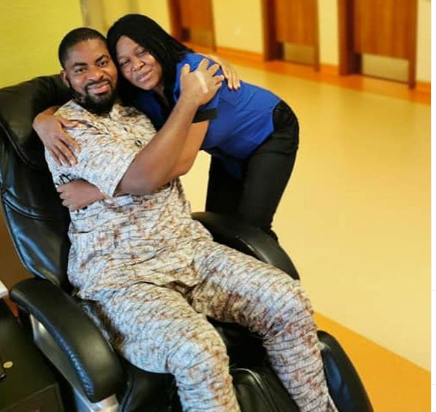 Reno Omokri has shared photos of Deji Adeyanju being treated in a Dubai-based hospital.

Adeyanju suffered injuries after allegedly being beaten by hoodlums during a #FreedomRally in front of the National Human Rights Commission on Monday December 23rd.

”Happening Now: Former APC spokesman, Timi Frank, visiting Deji Adeyanju at the hospital where he is on admission in Dubai. This is not time for much talk. The situation is just sad. Very sad. Deji, you are the great Nigerian hero!?” Reno wrote 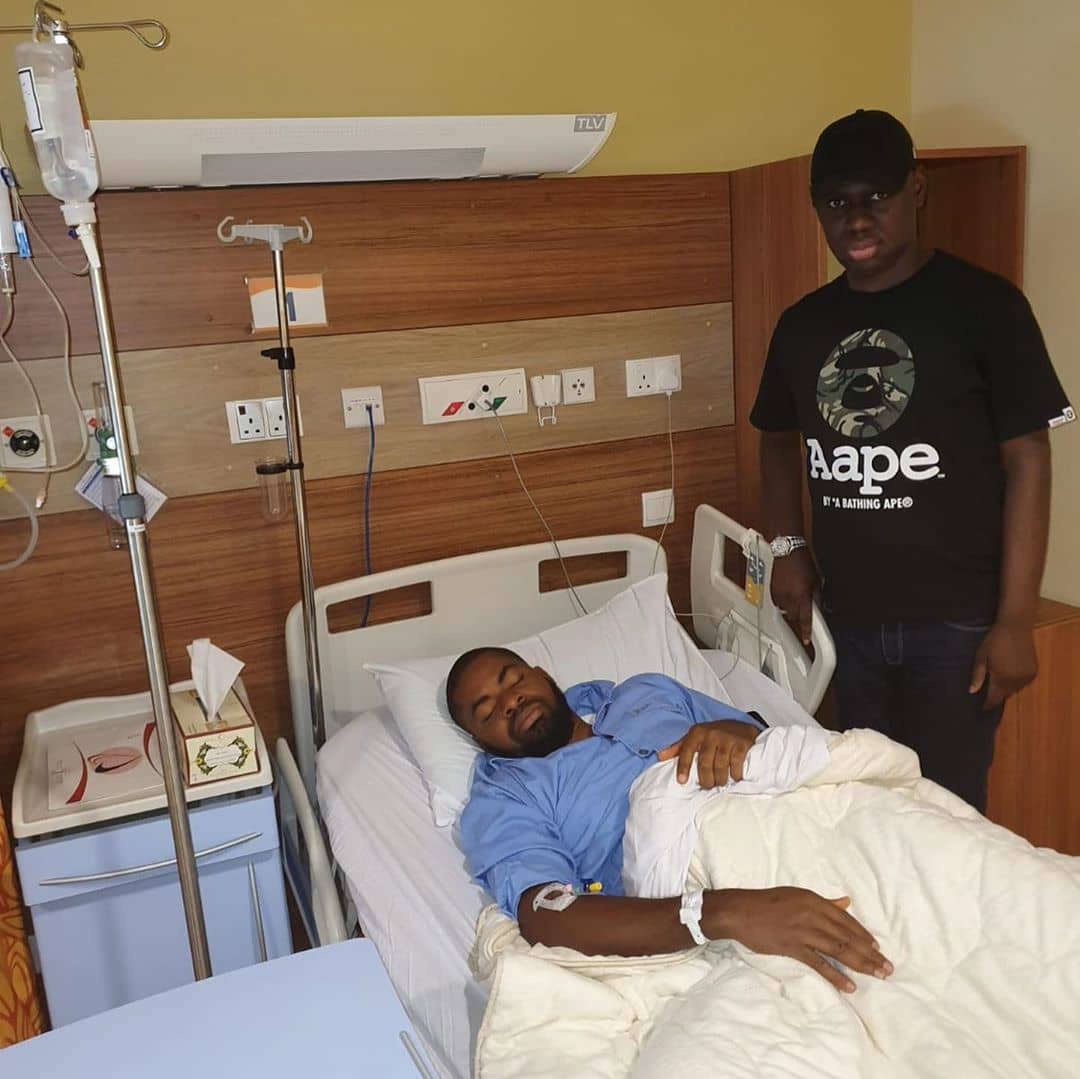 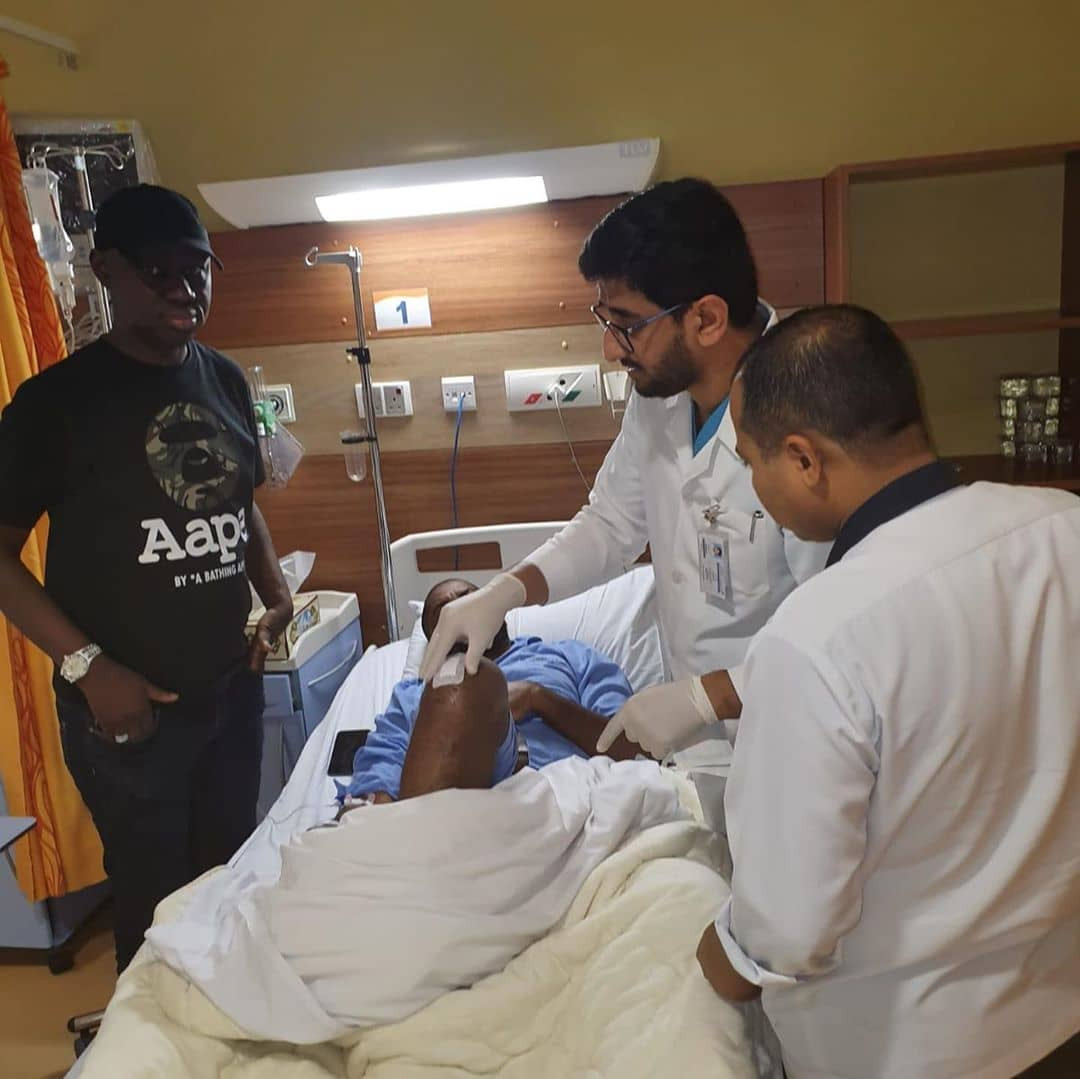 Rights activist, Deji Adeyanju, has undergone both brain and heart scan to ascertain the level of complications and internal injuries he sustained during an attack on him by hired government thugs in Abuja on Monday.

Adeyanju was flown to Dubai, United Arab Emirate, on Tuesday for further medical treatment following the deterioration of his health.

SaharaReporters gathered that the result of the Computed Tomography scan conducted shows that the activist has issues with his heart.

Adeyanju has been placed in an emergency ward while doctors battle to save his life.

Hired government thugs on Monday in Abuja pounced on Adeyanju and other rights activist during a protest tagged #FreedomRally at the National Human Rights Commission Commission to demand for the respect of citizens rights by the Nigerian Government.

In a video of the incident, the hired thugs were seen beating Adeyanju with sticks and all sorts of dangerous weapons as the activist struggled to escape from the scene.

Deji Adeyanju who suffered injuries after being beaten by hoodlums during a #FreedomRally in front of the National Human Rights Commission on Monday December 23, has been flown abroad for medical treatment.

The activist who alongside others was protesting against the rearrest and detention of Omoyele Sowore, was reportedly struggling to breathe after being left with deep cuts all over his body.

Deji has reportedly been flown to Dubai, United Arab Emirates, where he would be receiving comprehensive medical treatment.

..says it happened in the presence of police officers

Femi Fani Kayode has reacted to news that Deji Adeyanju has been hospitalized after being injured by participants in a counter protest.

According to reports, the political activist was leading a protest in front of the National Human Rights Commission when participants carrying out a counter protest attacked him. Police officers allegedly witnessed the violence but didn’t intervene.

Reacting to this, former Aviation Minister, FFK wrote: “The brutal attack on Deji Adeyanju @adeyanjudeji this morning is totally unacceptable. This represents a new low by those that are behind it. We hold the Government and their agents responsible and accountable for this wicked act. May God judge those behind it!” 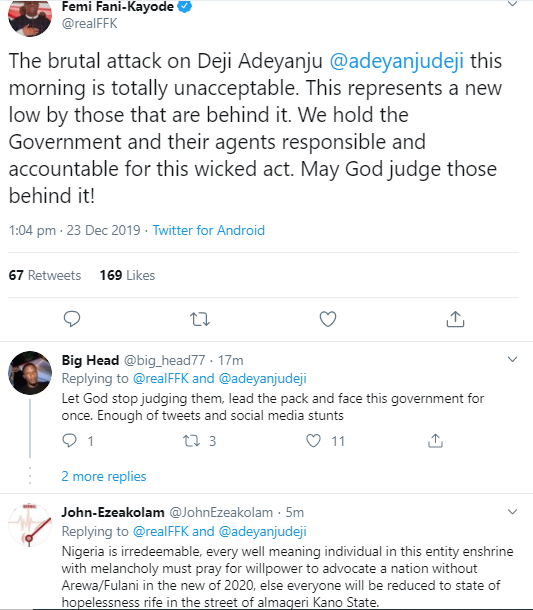 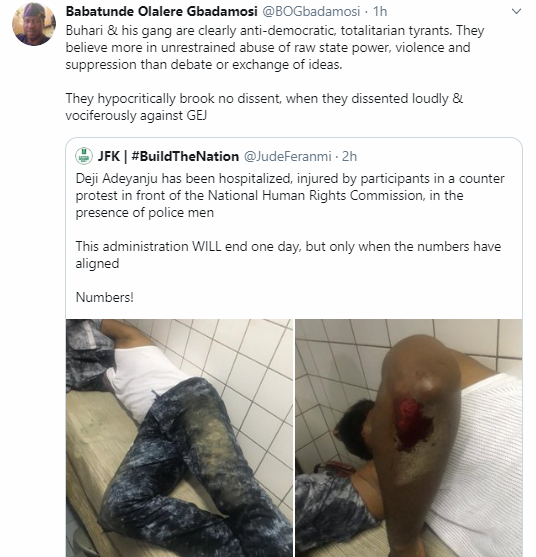 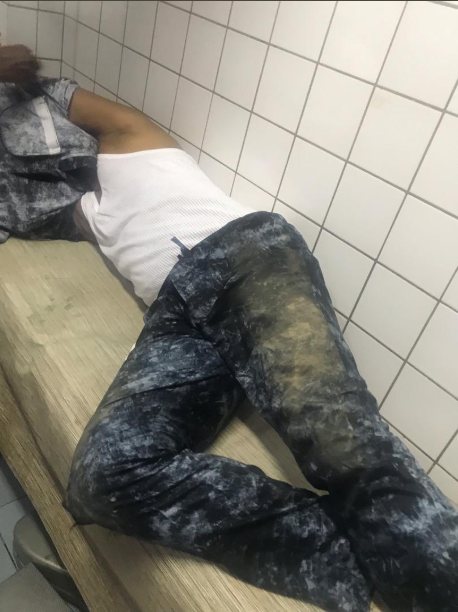 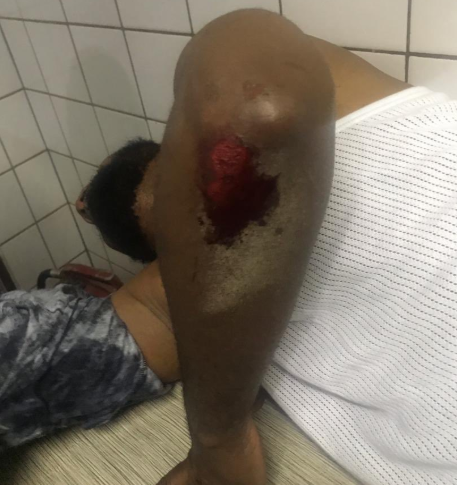