The 2020 edition of Coachella, one of the largest annual music festivals in the US, has been postponed due to concerns about the coronavirus.

The music festival, which holds annually at the Empire Polo Club situated within Riverside County (RC), recently enlisted Nigeria’s Seun Kuti among its lineup of musicians to perform on stage.

On Wednesday, Goldenvoice, the production company behind both the Coachella festival and Stagecoach Festival, however, released a statement saying that it has postponed the event until October.

The postponement was due to growing public health concerns about the rapidly spreading coronavirus. RC had recently reported its first case of the novel ailment.

While attributing the development to what it described as a “universal uncertainty,” Goldenvoice also said the postponement comes in compliance with a directive from the health authorities in RC.

“At the direction of the County of Riverside and local health authorities, we must sadly confirm the rescheduling of Coachella and Stagecoach due to COVID-19 concerns,” the company wrote.

“While this decision comes at a time of universal uncertainty, we take the safety and health of our guests, staff, and community very seriously.

“We urge everyone to follow the guidelines and protocols put forth by public health officials.”

A full list of artistes scheduled to perform at the 2020 edition of the Coachella Valley Music has been announced, and Seun Kuti is the only Nigerian on the list.

Seun Kuti will be performing alongside members of Egypt ’80, his late father’s band at the two weekends event which will hold in April.

This is coming a year after two Nigerian superstar artistes, Burna Boy and Mr Eazi took the center stage at the 2019 edition of the music festival.

Seun Kuti who shared a photo of Coachella 2020 lineup on Instagram wrote;

Cachella 2020 announced and We are going going back back to Cali Cali!! Swipe left for the atmosphere the last time we were there 8 years ago! @chefyeide in the background helping her partner build his dreams, be like her 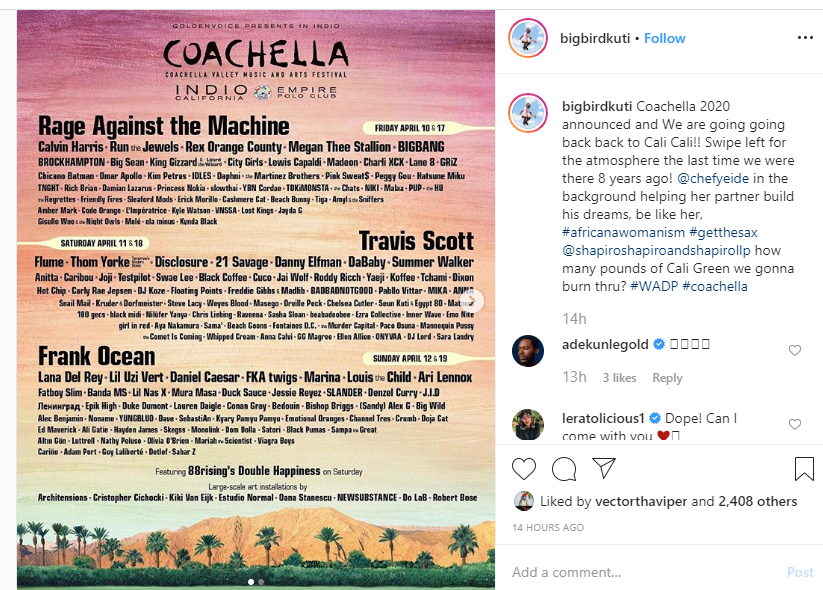