The outfit generated a lot of reaction on Instagram as many people crowd the dress for the night.

Nigerians are never quick to forget the #EndSars protest, which occurred in early October.

On the 20th, the Nigerian army opened fire at unarmed protesters who had stormed the lekki tollgate to press their demands against police brutality.

The question of who ordered the shooting has continued to linger on every youth’s lips as they always take time to celebrate fallen heroes at the lekki tollgate.

At the 14th edition of the Headies award, an event designed to celebrates achievements in the entertainment industry, specifically music genres, popular Nigerian comedian, Bovi was seen rocking the bloodied flag.

The comedian chooses to celebrate some Nigerian youths who lost their lives during the protest.

The outfit generated a lot of reaction on Instagram as many people crowd the dress for the night.

angel_gold_ervin: Right. Like he should! Best dress of the night. Fist✊🏽

king_jozef: U peepu shud watch out , this govt will arrest him for protesting at the headies 😂

softstrength: We will never forget!!!!!!+

ruzanacouture: Best dressed 🙌🙌🙌🙌 i pray This trend gets popular….

Bovi has demanded for an apology from ThisDay newspaper after they apologized to Bishop Oyedepo for the false report that he was denied US visa.

ThisDay editor issued an apology printed on their paper to the Winners Chapel founder. In the Editorial, it was stated that the report that Oyedepo was denied visa by the US embassy was found to be incorrect and an apology was tendered.

“If you?re apologizing to the Bishop, it is incomplete without recourse to me and my family” Bovi demands an apology from ThisDay newspaper

But comedian Bovi felt the apology was incomplete since he and his wife were not mentioned.

He pointed out that he and his wife Kris Ugboma were mentioned in the report to make it more sensational but when it was time to issue an apology, they left his family out and only apologized to Bishop Oyedepo.

It was claimed in the inital story that Bovi was issued a US visa while his wife was denied.

Bovi said the false report has affected his family greatly and he’s demanding an apology too.

“If you?re apologizing to the Bishop, it is incomplete without recourse to me and my family” Bovi demands an apology from ThisDay newspaper

He wrote: “Dear @thisdaynewspaper Editor, I just woke up to your apology to Bishop Oyedepo about the false story you published on him.

“I’m beginning to question wether you even read the story you’re apologizing for in the first place. Because if you did, you will know that in the reporters bid to add sting to the story, it was stated that I was issued the visa while my wife was denied.

“The slide above shows that neither me nor my wife was at the embassy on the said date, as your report suggests. Did you think my name and that of my wife in your sensational story were inanimate objects? Are you trying to measure us? What makes you think that the spice you added in cooking a poisonous meal should not be sifted as you try to purify your brand? Do you have any idea how damaging your story was to our peaceful life? Do you know how many calls and texts we had to respond to because of your story?

“What you have done is irresponsible, unprofessional, condescending and indecent. Your job is based primarily on research and information gathering. So if you really do not know me, note that I’m as global as your mind can imagine.

“If you’re apologizing to the Bishop, it is incomplete without recourse to me and my family.
I urge you to further your education to avoid such errors in future. Thank you.”

Bovi has slammed a Twitter influencer who didn’t get a joke he made about Tacha’s fans being responsible for his unsuccessful visa application.

It all began after comedian Bovi was asked what he would do if he wakes up as the President of Nigeria and he joked that he would “declare Marlians and Titans as terrorist organization.” 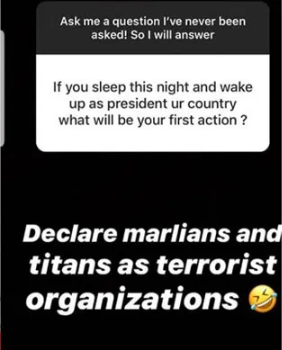 After Bovi’s joke, he returned to Twitter to make another joke about his visa application being rejected and he blamed Titans for it.

He tweeted: “The US embassy rejected my visa application this morning. These Titans are everywhere!”

A Twitter influencer, who is also a fan of Tacha, responded and asked Bovi what Titans have got to do with his unsuccessful visa application. He went on to accuse Bovi of seeking attention with Tacha’s name. 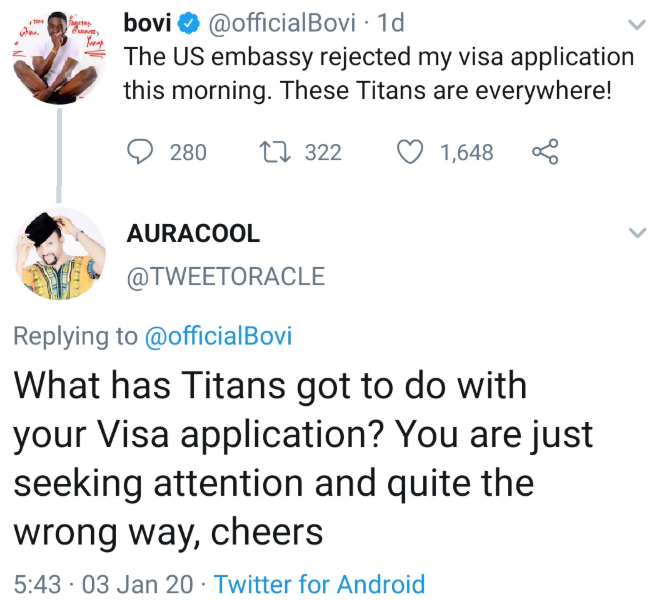 And Bovi slammed him, writing: “You have tunnel vision. That’s why a joke must be explained to you bit by bit. When they say “no leave no transfer”, your colorless life won’t still get the joke in that tweet.”

..says these Titans are everywhere

Bovi has taken to Twitter to jokingly cry out after his visa application got rejected by the United States Embassy.

Though the comedian did not reveal why his visa application was rejected, he however ”blamed” Big Brother Naija 2019 housemate, Tacha’s fans, Titans.

The US embassy rejected my visa application this morning. These Titans are everywhere! 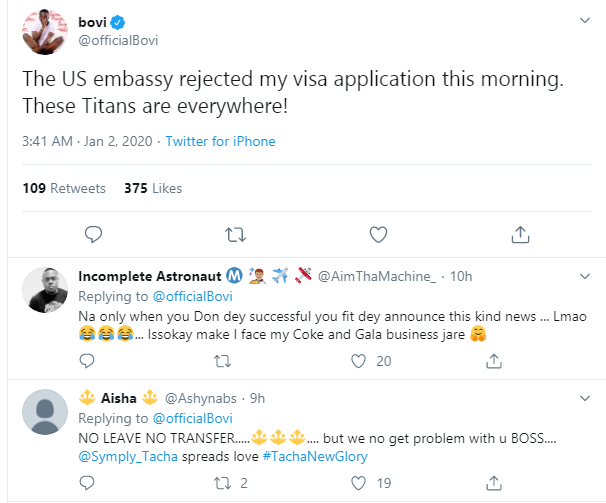 Nigerian comedian, Bovi has said he would declare Marlians and Titans as terrorist organisations if elected as president of Nigeria.

Tacha and Naira Marley are arguably part of the most talked about celebrities in year 2019, as a result of their strong fan base.

Bovi’s declaration came during a question and answer segment on Instagram, as he told his fans to ask him any question.

A fan responded by asking about the first thing he’ll do if elected the president.

In his response, Bovi said: “ Declare Marlians and Titans as terrorist organisations.”