American singer, Curtis Jackson, professionally known as 50 Cent, has been honoured with a star on the iconic of Hollywood Walk of Fame.

The rap mogul and power star received the star in honour of his work in music, film and television.

The renowned singer, who took to his Instagram page to celebrate the gray honour, shared a photo of his star on the Hollywood Walk of Fame with a caption.

“South Side on the map, wait till they see how I run with this..Hahaha ..they never seen nothing like me before,” he wrote.

50 Cent has joined the list of rappers, who have been awarded a star on the iconic Hollywood Walk of Fame.

Jackson, known as 50 Cent, is a hip hop artist and businessman who became famous for his streetwise raps and rags-to-riches life story.

The singer’s early life was on crime, drugs and violence, before he turned to rap, rocketing to stardom with the album ‘Get Rich or Die Tryin’ in 2003.

50 Cent has since branched out to become an actor and businessman.

His career has been littered with feuds with other rappers, arrests, legal and financial difficulties, while his recent recording output has been sporadic.

In 2000, Jackson was the victim of a severe shooting incident that left him with multiple injuries.

He returned to music after his recovery and made several low-budget recordings with his friends Lloyd Banks and Tony Yayo, as a crew called G-Unit.

Their efforts came to the attention of Eminem and Dr Dre, who heard 50 Cent’s “Guess Who’s Back?” mixtape in 2002.

They later signed him jointly to their labels, Shady Records and Aftermath Entertainment.

50 Cent’s debut album, Get Rich or Die Tryin’, was produced by Eminem and Dre. It was a massive commercial success that eventually sold nine million units.

The singer gritty singles, including “Wanksta” and “In Da Club,” were underpinned by strong hooks that helped turn them into crossover pop hits.

Jackson maintained a presence in the industry with the release of the album ‘Animal Ambition’ in 2014 and it sold just over 100,000 copies.

Following in the footsteps of hip hop moguls such as Dre and Jay Z, Jackson successfully expanded his brand into other markets.

He promoted and invested in Vitaminwater, a partnership that reportedly netted him $100 million.

The company was sold to Coca-Cola in 2007 and also founded the successful headphones line SMS Audio.

NobleReporters culled that Queen Latifah received her star in January 2006, followed by Diddy in 2008 and Pharrell Williams, who received his star in 2014.

Also, veteran rappers Pitbull and LL Cool J were awarded their stars in 2016.

It seems 50 Cent has met his match when it comes to being savage.

French Montana isn’t letting 50 Cent get away with bullying him online as he does to other people. Instead, he has hit back by posting receipts claiming 50 Cent has a secret fetish.

He claims 50 Cent likes transwomen with their penis still intact.

50 Cent usually ends most of his Instagram posts with the phrase, “Get the strap” and French says it’s his coded way of saying he likes women with the “magic stick”. 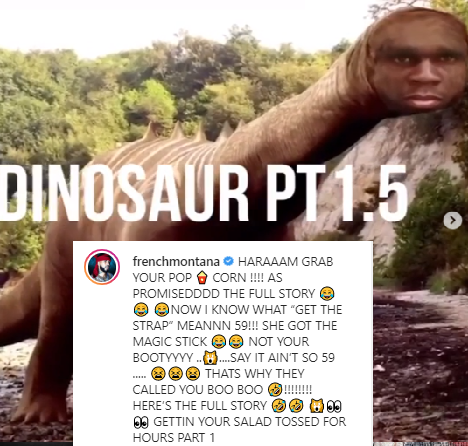 French Montana shared a video where a woman detailed her sexcapade with 50 Cent who French savagely refers to as a “dinosaur”. In the video, the woman narrated how she “ate” 50 Cent’s butt hole for 5 hours.

HARAAAM GRAB YOUR POP CORN !!!! AS PROMISEDDDD THE FULL STORY .NOW I KNOW WHAT “GET THE STRAP” MEANNN 59!!! SHE GOT THE MAGIC STICK. NOT YOUR BOOTYYYY ……SAY IT AIN’T SO 59 ….. THATS WHY THEY CALLED YOU BOO BOO !!!!!!!! HERE’S THE FULL STORY GETTIN YOUR SALAD TOSSED FOR HOURS PART 1

The beef between both men intensified after 50 Cent caught wind of a Twitter thread claiming that Montana has people hacking Spotify accounts to give his single “Writing on the Wall,” featuring Post Malone, Cardi B, and Rvssian, a jump on the charts.

On Friday, January 3, 50 Cent posted on Instagram a stack of blank CDs in an attempt to get under Montana’s skin.

He captioned the post: “Somebody send this to wrench. Damn he gonna need the old apple to burn the new music though. LOL.”

Montana, who has been beefing with 50 Cent ever since 50 came after his purchase of an older model Bugatti, took to Instagram to call out 50. Montana seems to believe that 50 is the culprit behind the increased streams.

He replied to him: “Yeah, you sensitive dinosaur. I got all under your skin. Your whole page is about me. When that hate don’t work they start telling lies, baby. Go keep buying my streams and talking ’bout faking streams. I checked on it. They all coming from New York. I did my homework. Damn, you mad.”

French Montana added: “Stop buying my streams. I’m doing numbers. You can’t fake … Yo, how you go out your way, and call yourself an artist and buy my streams to make me look bad?”

In the caption, French Montana wrote:

59 HOW YOU STOOP THAT LOW DINOSAUR. YOU BUY FAKE STREAMS ON MY SONG AND TRY TO USE THAT AGAINST ME. WOW. YOU THAT DESPERATE. I SHOWED PAPER WORK FOR 2MIL NOW YOU GOT NOTHING ON ME, BUT TO STOOP THAT LOW. BULLY DAYS ARE OVER WITH YOU SHOULD USE THAT MONEY FOR YOUR RAP SHOWS DINOSAUR !! YOU CAN ONLY PERFORM IN SOUTH KOREA ITS OK TO TAKE AN “L”AND IM LOOKING FOR YOUR DENTIST YOU DESERVE A FULL REFUND 59 AN EVIL DONKEY.

The rapper kept going in on 50 Cent in other Instagram posts. He posted a screenshot from an article claiming that 50 owed $21,000 over a Bentley.

French Montana even went as far as leaking a clip from 50 Cent’s hit show “Power” ahead of its midseason premiere on Sunday, January 5.

Sharing a clip from an episode of Power that is yet to air, French Montana wrote:

All you power fans 59 don’t show u who killed ghost tomorrow….. he still Tryana drag his last piece of power but here’s the highlight of tomorrow’s episode let me save you a hour of your life

All you power fans 59 don’t show u who killed ghost tomorrow….. he still Tryana drag his last piece of power 😂 but here’s the highlight of tomorrow’s episode let me save you a hour of your life 😂🐀 🦖

French Montana and 50 Cent’s beef has moved past Bugattis.

After taking shots at each other over their pricey whips, French has accused 50 of buying fake streams for his Montana single “Writing on the Wall” featuring Post Malone, Cardi B, and Rvssian.

The song, which was released back in September, saw a recent spike in streams. It jumped all the way up to #21 on Spotify, but remains in the 1000s on Apple Music. While the song has been popular on the TikTok app, it’s only rising up the charts on one streaming service.

Some including 50 have accused French of buying fake streams to increase his numbers. And now French is seemingly giving 50 credit for his Spotify surge.

“Yeah, you sensitive dinosaur. I got all under your skin. Every post on your page is about me,” said French in a video posted on Instagram. “When that hate don’t work they start telling lies, baby. Go keep buying my streams and telling them I was faking streams. I checked on it. They all coming from New York. I did my homework. Damn, you mad.”

He went on to insult 50’s “horse teeth” before telling him: “Stop buying my streams. I’m doing numbers. You can’t fake… Yo, how you go out your way, and call yourself an artist though and buy my streams to make me look bad?”

He also posted a video of a woman who claims to have had sex with 50. “I got that girl that ate your booty hole when you was writing that ‘Power’ script for five hours,” said French, who previously posted an alleged photo of Eminem kissing 50.

The beef ignited last month after 50 called out French for buying a 2008 Bugatti, claiming that he took out a 60-month loan on the car.