Kim Kardashian has slammed reports that she bought her daughter North West the bloody shirt worn by President John F Kennedy on the day he died.

The rumours that Kim bought North John Kennedy’s bloody shirt came after it was revealed that she bought North Micheal Jackson’s jacket for Christmas.

A fake photo which appeared to be from Kim’s Instagram stories showed JFK’s white and grey pin-striped shirt torn and covered with blood.

The caption read: “Along with the Michael Jackson’s jacket and hat, North also got the shirt John F. Kennedy wore when he was assassinated.”

Reacting to the viral photo, Kim tweeted: “WOW this is obviously fake!… I did not get JFK’s shirt. That is a sick joke that someone tweeted as a fake ig story that I never posted.” 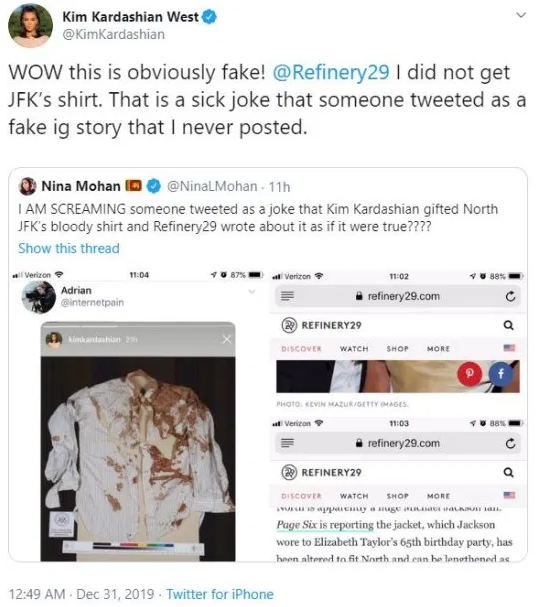 It comes after Kim, 39, revealed that she and husband Kanye West had bought North items belonging to late Michael Jackson at auction as a Christmas present.

The six-year-old now owns the iconic jacket which Jackson wore at Elizabeth Taylor’s 65th birthday and to the Cannes Film Festival in 1997.

Kim and Kanye bought the jacket for $65,625 at auction in October. The couple also purchased Michael Jackson’s white Smooth Criminal hat worn in the song’s iconic music video and it still has his make-up stains on it.

“For Christmas, Kanye and I gave North this jacket, and this was Michael Jackson’s jacket that he wore with Elizabeth Taylor. North is a really big Michael Jackson fan, and we knew she would love this.” Kim told her followers.

“So we won this on auction for Northy for Christmas and we had it like, tacked up so she can wear it.”

Kim added: “I’m obsessed with auctions and my brother is the biggest Elvis Presley fan so I got him two of Elvis’s rings for Christmas!”