William Henry Gates was born on 28 October 1955, in Seattle, Washington. As the principal founder of Microsoft, Bill Gates is one of the most influential and richest people on the planet. Recent estimates of his wealth put it at US$84.2 billion (Jan. 2017); this is the equivalent of the combined GDP of several African economies. In recent years he has retired from working full time at Microsoft, and has instead concentrated on working with his charitable foundation “The Bill and Melinda Gates Foundation.”

His father William Gates Sr was a senior lawyer, and his mother, Mary, served as an executive for a major bank. The family were wealthy but, remembering the challenges of the Great Depression, they encouraged their children to work hard and take nothing for granted.

Aged 13, Gates attended the private Lakeside school. It was here that Gates had his first introduction to computers. He taught himself to programme in Basic, making a simple ‘Tic-Tac-Toe’ game. Gates enjoyed the process of working with computers and arranged with a company Computer Center Corporation (CCC) to spend time on their computers – learning source code, such as Fortran, Machine Code and Lisp.

In 1973, Gates enrolled at Harvard, where he studied mathematics and computer science. However, Gates was more interested in pursuing his own coding, and when he saw an opportunity to found his own company, he dropped out of Harvard without finishing his course.

Bill Gates founded Microsoft in 1976 when he formed a contract with MITS (Micro Instrumentation and Telemetry Systems) to develop a basic operating system for their new microcomputers. In the early days, Bill Gates would review every line of code. He was also involved in several aspects of Microsoft’s business such as packing and sending off orders

The big break for Microsoft came in 1980 when IBM approached them for a new BASIC operating system for its new computers. In the early 1980s, IBM was by far the leading PC manufacturer. However, increasingly, there developed many IBM PC clones; (PCs produced by other companies compatible with IBM’s). Microsoft worked hard to sell its operating system to these other companies. Thus Microsoft was able to gain the dominant position of software manufacture just as the personal computer market started to boom. Since its early dominance, other companies have struggled to displace Microsoft as the dominant provider of computer operating software. Programs like Microsoft Word and Excel have become the industry standard. 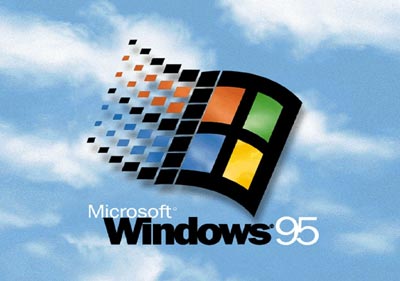 In 1990 Microsoft released its first version of Windows. This was a breakthrough in operating software as it replaced text interfaces with graphical interfaces. It soon became a best seller and was able to capture the majority of the operating system market share. In 1995 Windows 95 was released, setting new standards and features for operating systems. This version of Windows has been the backbone of all future releases from Windows 2000 to the latest XP and Vista.

Throughout his time in office, Bill Gates has been keen to diversify the business of Microsoft. For example, Microsoft’s Internet Explorer became the dominant web browser, although this was primarily because it came pre-installed on most new computers. In recent years, Internet Explorer has seen its market share slip.

One area where Microsoft has never been successful is in the area of search engines. MSN live search has struggled to gain more than 5% of market share. In this respect, Microsoft has been dwarfed by Google. Nevertheless, the success of Microsoft in cornering various aspects of the software market has led to several anti-trust cases. In 1998 US v Microsoft, Microsoft came close to being broken up into three smaller firms. However, on appeal, Microsoft was able to survive as a single firm. Although Microsoft was the dominant computer firm of the 1980s, and 1990s, they are now seen as an ageing and declining company – compared to the more dynamic Google and Apple. 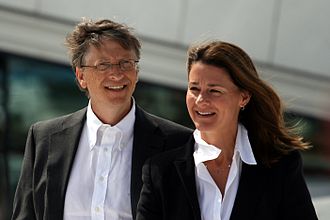 Bill Gates is married to Melinda French (married in 1992). They have three children Jennifer (1996), Rory (1999) and Phoebe (2002). With his wife, Bill Gates formed the Bill & Melinda Gates Foundation. Bill Gates says much of the inspiration came from the example of David Rockefeller. Like Rockefeller, Gates has sought to focus on global issues ignored by the government; he also expressed an interest in improving the standards of public school education in the US. He has appeared with Oprah Winfrey to promote this objective. In respect to charitable, philanthropic activities Gates has also received encouragement from investor Warren Buffet, who has given away $17 billion, through the Gates Foundation.

From 2008 Gates has worked full time on his philanthropic interests. It is estimated Gates and his wife Melinda have given away $28 billion via their charitable foundation – including $8 billion to improve global health.

Gates has said that he has no use for money, and will only leave a small percentage of his wealth to his children. In an interview with the Daily Telegraph, Gates states:

“I’m certainly well taken care of in terms of food and clothes,” he says, redundantly. “Money has no utility to me beyond a certain point. Its utility is entirely in building an organisation and getting the resources out to the poorest in the world.”

His main areas of interest in philanthropy have been improving health, and in particular helping to reduce diseases, such as polio which affect young children. He has also given more focus to environmental issues. In 2015, he gave $1 billion to a clean energy project, as he sees supporting new ‘greener’ technologies as a way to help deal with global warming. Asked about the motivation of his giving, Gates replies:

“It doesn’t relate to any particular religion; it’s about human dignity and equality,” he says. “The golden rule that all lives have equal value and we should treat people as we would like to be treated.”